AceLink Therapeutics is dedicated to developing novel drugs for both rare and common genetic diseases. The AceLink team is comprised of a streamlined group of experienced drug development scientists and consultants, which allows us to efficiently evaluate and rapidly advance therapeutic candidates.   While our initial focus is on developing therapies for kidney diseases, AceLink’s goal is to diversify the pipeline to address the unmet clinical need for a broader set of genetic diseases.

More than 60 genetic diseases are currently known to directly or indirectly affect kidney function. These diseases range from relatively common to very rare and can impact kidney functions in infants to adults. Many of these diseases are progressive and eventually lead to chronic kidney disease (CKD) and end stage renal disease (ESRD). Unfortunately, for the majority there are no disease modifying therapeutic options and patients eventually resort to renal replacement therapies (RRT) including chronic dialysis or transplant. With their high prevalence and limited therapeutic options, these kidney diseases present a significant health care and economic challenge

Autosomal Dominant Polycystic Kidney Disease (ADPKD): ADPKD, the most common of the inherited kidney diseases, is characterized by the development of numerous fluid-filled cysts, kidney enlargement, and eventual progression to CKD and ESRD. While some severe forms of ADPKD can affect young children, most develop symptoms in early adulthood or later. The probability of progressing to ESRD increases with age with 50% of ADPKD patients over the age of 60 years requiring RRT. People suffering from PKD also develop non-kidney symptoms including cyst formation in the liver, hypertension, cardiac disease, and aneurysm.   ADPKD is thought to occur in approximately 1 in 800 people with the precise incidence varying in different ethno-geographic populations. Worldwide, there is estimated to be more than 12 million people suffering with ADPKD and, in the US alone, there are over 600,000 patients living with ADPKD with more than 30,000 suffering kidney failure each year.

ADPKD is an autosomal dominant disorder, indicating that inheritance of a single mutation from either the mother or the father can cause disease. The majority of ADPKD cases are caused by a mutation in one of two genes, PKD1 or PKD2. PKD1 mutations are more common and associated with more severe disease. 80% percent of the ADPKD patients carry a PKD1 mutation and 15% carry a PKD2 mutation. The remaining 5% percent of ADPKD cases arise from mutations occurring in a handful of other genes. The PKD1 and PKD2 genes encode the polycystin-1 (PC1) and polycystin-2 (PC2) proteins, respectively. These two proteins localize to the primary cilia of renal epithelial cells and play an important role in regulating renal development and function, promoting epithelial differentiation, and preventing cell proliferation. PC1 and PC2 interact in primary cilia to form a membrane spanning complex where they are needed to maintain Ca2+ homeostasis. Deficiency in either protein leads to a decrease in intracellular Ca2+ and a corresponding increase in the intracellular second messenger cAMP. The elevated cAMP is thought to alter several intracellular signaling pathways that regulate fluid secretion and cellular proliferation, ultimately leading to of cyst formation and progression to ESRD. 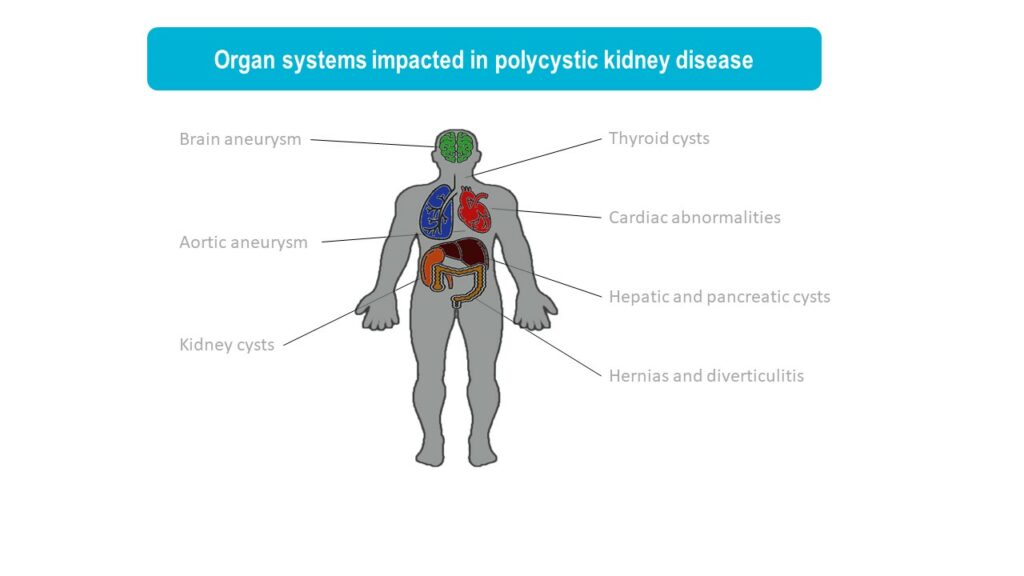 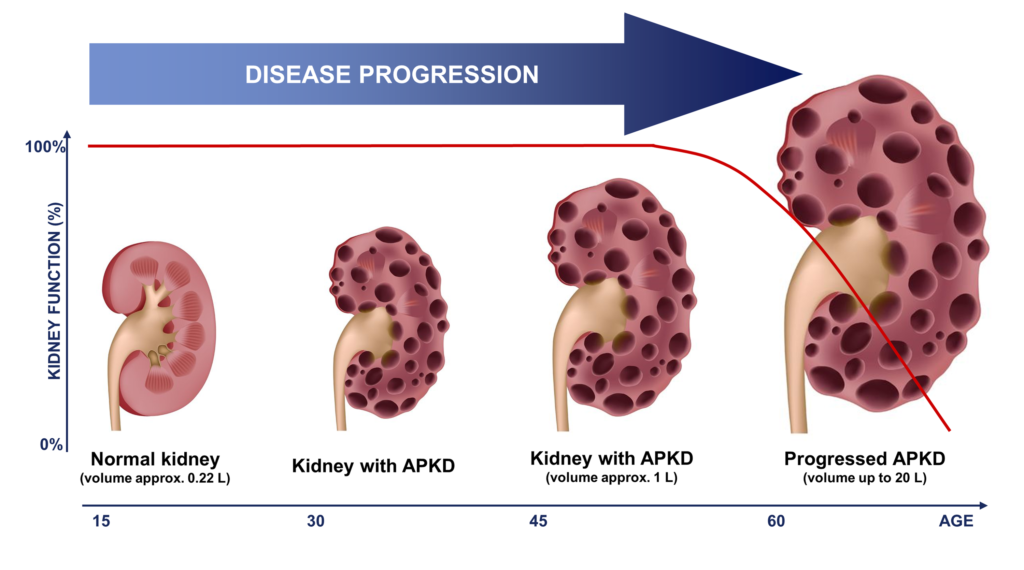 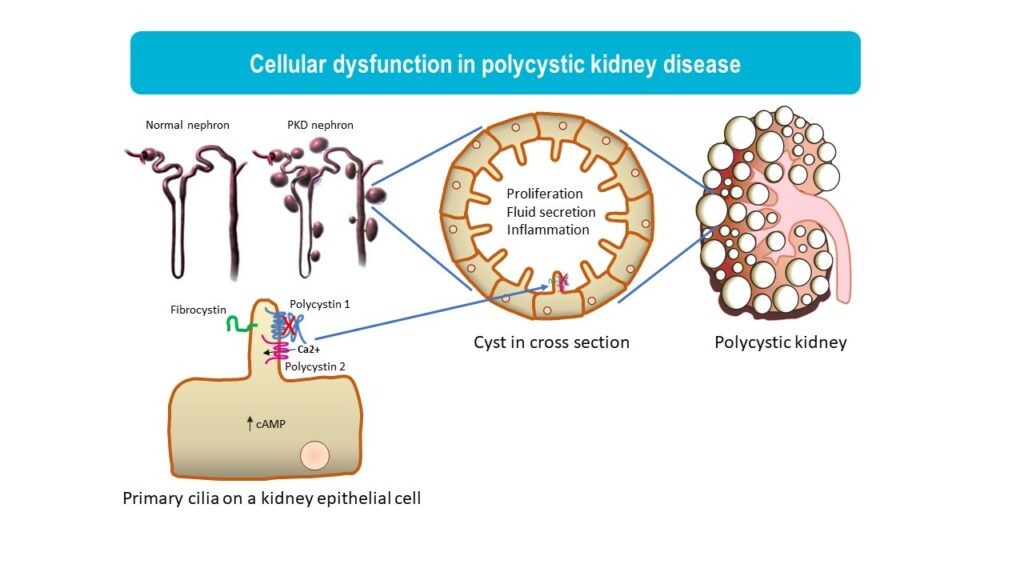 Autosomal Recessive Polycystic Kidney Disease (ARPKD):  ARPKD is also characterized by the bilateral formation of kidney cysts that are primarily localized to distal tubules and collecting ducts. Cyst formation then progresses to kidney enlargement and eventually ESRD. People with ARPKD also develop liver dysfunction and arteriole hypertension. In contrast to the dominant disease, ARPKD is typically a more severe and earlier onset disease that usually develops in utero or early childhood. Many patients do not survive after birth and those that do survive will likely require RRT by their first decade of life.

ARPKD is a recessive disease requiring inheritance of two disease-causing mutations with one mutation contributed from each parent. ARPKD is less common than ADPKD, affecting approximately 1 in 20,000 people. Although mutations in several genes have been associated with ARPKD, most cases arise from mutations in the PKHD1 gene, which encodes the fibrocystin protein. Fibrocystin localizes to the primary cilia of renal epithelial cells where it is required for renal development and maintenance. Fibrocystin has been shown to associate with the polycystin complex (PC1-PC2) and its deficiency impact similar proliferative pathways to promote cyst formation, kidney enlargement, and progression to ESRD.

Fabry disease is a rare genetic lysosomal storage disorder that is progressive, destructive, and potentially life-threatening. Fabry disease is a caused by a defect in the GLA gene, encoding the α-galactosidase A (GalA) enzyme.  GalA functions to degrade globotriaosylceramide (GB3) in the lysosome and GalA deficiency results in the pathological accumulation of this glycosphingolipid. In Fabry disease different cell types throughout the body accumulate GB3, however this accumulation mainly impacts skin, peripheral nervous system, heart, and kidney and can lead to a wide range of mild to severe symptoms including potentially life-threatening consequences such as kidney failure, heart attack, and stroke.

Given that the GLA gene is located on the X chromosome, Fabry disease is considered an X-linked disorder. Therefore, in males, a single GLA mutation on one X chromosome can cause Fabry disease. An estimated 1 in 40,000 to 60,000 males are affected by this disorder. Traditionally, female carriers of GLA mutations were thought to be unaffected because they have one normal X chromosomes, however this thinking has recently changed. In many females, a single GLA mutation has been shown to causes clinical symptoms, likely due to the random inactivation of the normal X chromosome. These carriers experience many features of Fabry disease including high blood pressure, heart disease, stroke, and kidney failure. However, these symptoms develop later and are milder than in affected males. Interestingly, genetic studies of patients suffering from kidney disease or stroke have shown an enrichment of individuals with GLA mutations that have not previously been recognized as suffering from Fabry disease. Given there are likely many cases of undiagnosed Fabry disease in males and females, the overall prevalence of Fabry disease is likely underestimated. 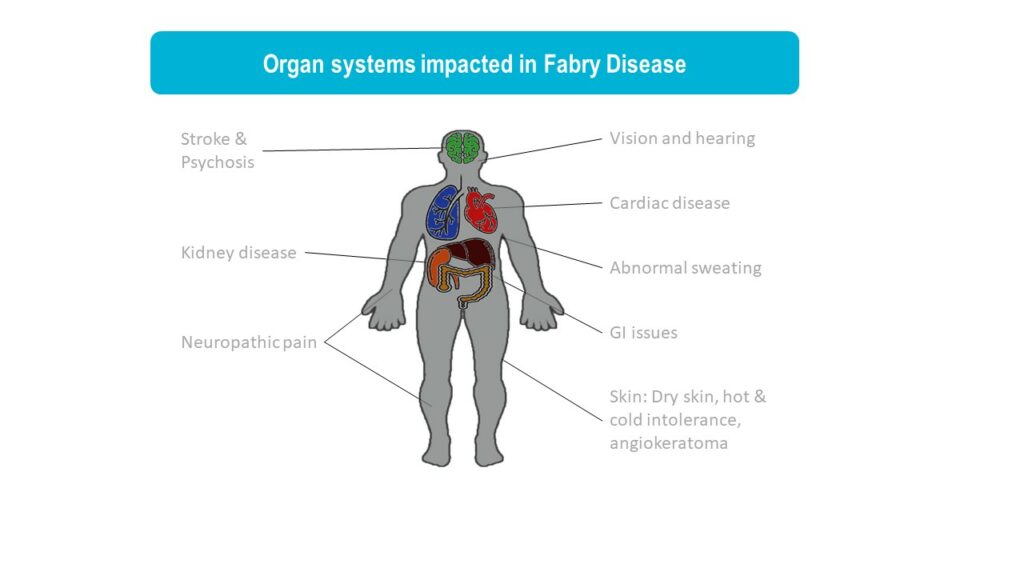 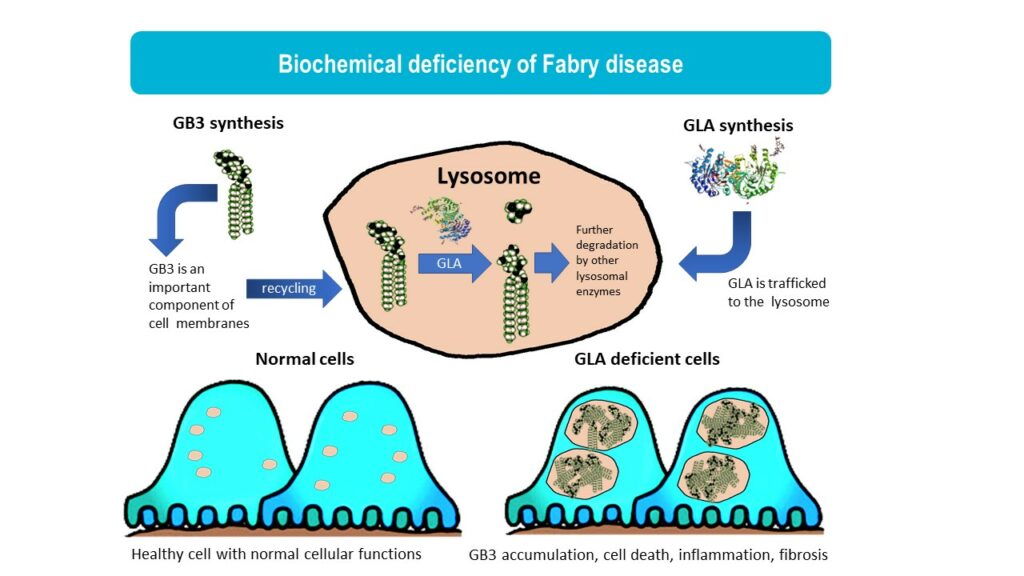 Enzyme replacement therapy (ERT) for Fabry disease, involving intravenous delivery of GalA protein, has been approved for over 15 years. While Fabry patients receiving GalA ERT have reduced progression of many Fabry symptoms, including cardiovascular disease and ESRD, the response can be limited and variable. The incomplete benefit of ERT could be attributed to lack of GalA correction all specific cell types. For example, studies have shown that GalA enzyme is unable to completely clear stored GB3 from kidney podocyte cells, and this stored material has been speculated to be the reason that some patients on ERT still develop kidney disease. The limitations of ERT highlight the need for safe and effective small molecule therapies that are more efficient at penetrating diverse cell types and tissues.